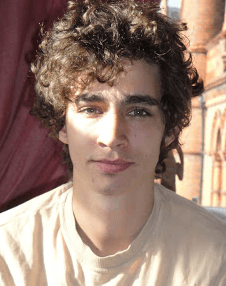 Robert Sheehan started life in County Laois, Ireland on 7 January 1988. He first considered acting as a career aged 14 when his mother took him to an audition for Song for a Raggy Boy where he was offered a part. In 2006, Sheehan played the crippled boy in Cripple of Innishmaan. He briefly studied Film and TV studies at Galway-Mayo Institute of Technology, leaving in his first year. A life decision that boded well for his acting career. Here we take a brief look at his life, career and filmography.

Robert Sheehan starred as one of the lead characters in the Cherrybomb (2009) set in Belfast. From 2009 to 2010, he starred as a young offender in the first two series of the E4 drama Misfits and in May 2011 he was nominated for a BAFTA in the “Male Supporting Actor” category for his role, though a month earlier it was announced he would not be appearing in Misfits for season three.

In 2010, Robert Sheehan was nominated for an IFTA award in the Rising Star category. He was chosen to replace the original voice of Ray in A Turtle’s Tale: Sammy’s Adventures. In October 2010, he was offered the part of Darren, a member of gangland Dublin in the four-part drama Love/Hate on Irish national television.

Sheehan played Kay in the US fantasy thriller, Season of the Witch (2011). From September to November 2011 his career shifted to the stage where he starred in The Playboy of the Western World at the Old Vic Theatre. He also starred in Arjun Rose’s Demons Never Die and appeared in the second season of the BBC crime drama series Accused the same year.

In 2011, he was involved in a trailer for Bleak Sea, a film trailer made solely for a trailer competition. In 2012 it was rumoured Sheehan was to star in three films currently in development: In Between The Waves, Wayfaring Strangers and Romeo and Brittney.

Robert Sheehan played Simon Lewis in the film City of Bones (2013) and in the same year was honoured by University College Dublin’s Literary and Historical society.

In September/October 2015 he played Richard Duke of Gloucester/Richard III in Trevor Nunn’s revival of The Wars of the Roses, John Barton’s adaptation of Shakespeare’s three parts of Henry VI and Richard III at the Rose Theatre, Kingston upon Thames.

In October 2015, he received the Burke Medal for Contribution to Discourse Through The Arts from Trinity College Dublin’s College Historical Society.